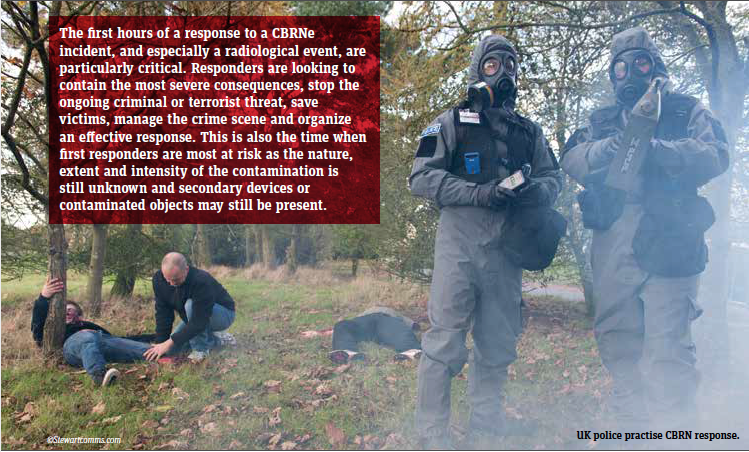 CBNW magazine has just published an article on the TERRIFFIC project, which explains how the first hours of a response to a CBRNe incident, and especially a radiological event, are particularly critical. Responders are looking to contain the most severe consequences, stop the ongoing criminal or terrorist threat, save victims, manage the crime scene and organise an effective response. This is also the time when first responders are most at risk as the nature, extent and intensity of the contamination is still unknown and secondary devices or contaminated objects may still be present.

The article goes on tot explain that to complicate things even more, the situation can often be extremely dynamic. The continued presence of the perpetrators or terrorists at the crime scene and the potential combination of the RN attack with a conventional attack are genuine threats. Changing meteorological conditions, the fragility of the buildings damaged by the explosion, the presence of secondary IEDs (improvised explosive devices) timed to explode after the arrival of the first responders, the presence and state of the victims, and the reaction of the general public are all further complications.

For the incident commander, it is vitally important to find out as much about the situation as possible and that situational awareness is updated dynamically, accurately and quickly. Improved situational awareness and a Common Operational Picture will ensure that the Incident Commander is able to make better-informed decisions.

TERRIFFIC is designed to lead to reduced response time, fewer risks for the response team, and less human intervention in the operation due to a higher number of automated processes and extended mobile detection capabilities.

The full magazine is available from: https://issuu.com/immags/docs/cbnw_issue_1_2019