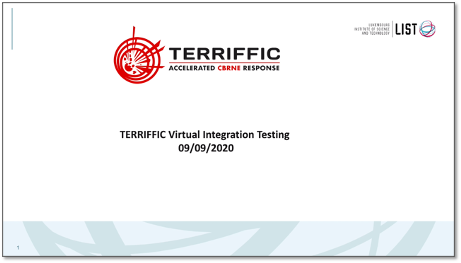 The Augmented Reality solution, developed by the Luxembourg Institute of Science and Technology, was successfully integrated with the incident management information software during testing in both Luxembourg and the United Kingdom.

This short video shows the progress that has been achieved in the development of a new Augmented Reality solution for the TERRIFFIC project. In it you can see both the inner and outer cordons that have been set – obviously much closer together than they would be own real life! A UAV and UGV are also represented, both with a sensor attached that is capable of measuring the dose of radiation being emitted from the source.

A range of other CBRNe symbols have also been developed that can be added by the user, meaning that a whole picture of the incident can be built up and provided to the incident commander as part of the objective of delivering faster and better situational awareness.